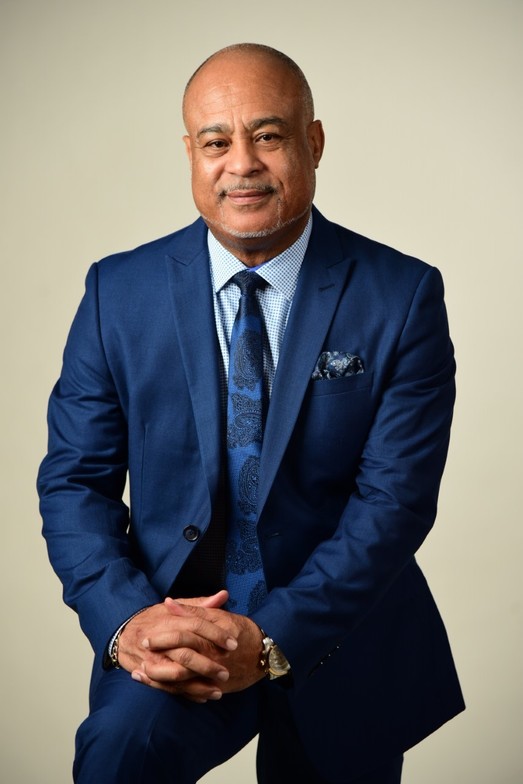 Woodroe W. Thompson affectionately known as “Woody” was born in St. Thomas, Jamaica. He is the first-born son of the late Roland and Lucille Thompson. After graduating from Seaforth Secondary School, he relocated to Kingston, Jamaica where he pursued a career as an Electrician. Woodroe, his brother Winston, Sisters, Gylnetta, Arlene and Esther were nurtured in a very strong Christian environment. He holds fond memories of those early days of Christian dynamics that laid the foundation for later religious experiences, which made him who and what he is today. In 1980, Woodroe immigrated to Hamilton, Ontario where he lived with his sister, Glynetta and attended the Hamilton Church of God of Prophecy.

It was during that time that he met Pauline Jacqueline Williams. They were married on September 17, 1983. Woodroe then relocated to Oshawa, Ontario. Pauline gave birth to their first son Adrian WoodroeThompson. As a result of the growth of his family Woodroe decided to change career as an Electrician, so as to better able to provide for his family. He worked as a bricklayer, building houses and was now adequately able to take care of the needs of his family.

He remained very active in his Local Church serving in various capacities. To equip himself to serve Christ and his church he pursed theological studies with School for Advanced Biblical Studies in Toronto. In the summer of 1988 while working on a scaffold he fell to the ground sustaining injuries to his back and right shoulder. About this time there was a new addition to the family, namely Christopher Roland Thompson. This proved to be a very difficult time for his family as he was unable to return to work. Again God was at work, and what Satan meant for evil God meant it for good. During this time Woodroe enrolled at Durham College in Oshawa, Ontario, and pursued Academic Studies.

It was now evident that as a result of his injuries he would have to again choose a different career path. He now enrolled himself in the Toronto School of Banking. Since his conversion, Woodroe was always aware of the call of God upon his life. It became more forceful as God opened doors and made it possible for him to travel to Local Churches in the GTA and in the U.S.A sharing the gospel of Christ. The Oshawa Local Church and the National Overseer Richard Davis recognized God’s call upon his life, and in 1990, he was appointed to his first pastorate in Kingston, Ontario.

In that same year, moving his family from Oshawa to Kingston, Ontario he was appointed National Youth Director for the Churches of God of Prophecy in Eastern Canada. In 1981 the then Overseer, Bishop Wade Phillips asked him to pray about assuming the pastorate of the Bramalea, Brampton church. At that time there were two small churches functioning in close proximity to each other and would be amalgamated with a new pastor. During that same year under the leadership of Pastor Thompson, the youth of Eastern Canada took a bold step in organizing a Summer Mission Campaign in Halifax, Nova Scotia. This campaign was so successful that the Overseer requested that Pastor Thompson and family relocate to Halifax, Nova Scotia instead of settling in Brampton. But his wife Pauline was not convinced that it was God’s will to move to Halifax, Nova Scotia. Pastor Thompson and family then assumed the pastorate in Brampton.

During the amalgamation of the Churches in Brampton, property was purchased on which to build a Sanctuary. It was now his responsibility to bring this to reality. Immediately after assuming the pastorate, Pastor Thomspon aggressively pursued the vision of building a sanctuary to seat three hundred. In the spring of 1993, the building was completed and dedicated to the glory of God. This building would prove to be the second of its kind, built and owned by the Church of God of Prophecy of Eastern Canada.

Pastor Thompson has traveled to Cameroon, Kenya, the United States and Jamaica sharing the Gospel of Christ. He was also privileged to visit the Holy Land in 1998. Pastor Thompson enrolled at York University in 1997 to pursue a degree in Counseling and Psychology. However, due to the demands of pastoral ministry he was not able to complete his studies. He is an avid reader, and a believer in continuing education, and has always sought opportunities to continue in the goal of Life Long Learning.

In January of 2002, Pastor Thompson’s dad passed away. His Dad had been the greatest influence in his life, and was instrumental in preparing him to be the kind of person he is today. The death of his father impacted his life greatly. In March 0f 2002, he faced another challenge, when he received word that his Mother had passed away. This was again a very difficult time, but God who is faithful gave him grace that was needed, and Pastor Thompson was able to preach both funerals. He gives thanks to God for Godly parentage, and looks forward to joining his parents in heaven.

The Local Congregation at North Park Worship has now grown from a membership of 60 to 505 and holds two services on Sunday morning.

His vision is to see local churches mobilized for innovative 21st century ministry through effective ministerial training, development and leadership. Bishop Thompson holds a Master of Divinity (MDIV) from Tyndale Seminary in Toronto. A previous host of the programme ‘Nite Lite Live’ on CTS Television in Burlington, Ontario for several years, he is now Host and Executive Producer of Let’s Talk with Woodroe Thompson, seen on YES TV.

He has three granddaughters: Mya, Tasian and Milania. He is an avid reader, loves movies, and considers himself a table tennis enthusiast.