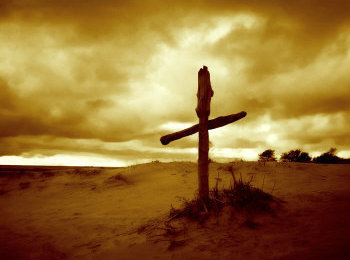 It is very unusual to find any of the events of Christ's life contained in all four Gospels, because the Gospels are not merely a chronological history of the life of Jesus Christ. Sometimes we forget this fact and we get confused by the differences between Matthew, Mark, Luke, and John. Each writers chose a certain perspective towards the life of Jesus and selected events to support their central theme. For example, Luke clearly wrote with the idea of presenting a compassionate, gentle saviour who bears burdens, and gives Himself willingly as a sacrifice for all humankind. Because each Gospel writer chose a different theme, it is unusual that Matthew, Mark, Luke, and John all record the events surrounding the man Barabbas. Yet this story is in all four Gospels. And not only that, but it occupies an important place in all the Gospels. This is more than the account of the betrayal of Christ by Judas, and certainly more than the accounts of those parts of the trial that only one or two of the Gospels gives to us. On the surface, the story of Barabbas seems like a very simple one, quickly read and understood. But this story is fascinating, not only for what it's teaches about the death of Christ, but for its dramatic illustration. The will of God for Jesus was that His death would be our deliverance. Here in this captivating story is a great illustration of this Gospel truth.

The basis of the story lies in Pilate's desire to see Jesus released even though His accusers were clamoring for His death. He could have insisted on Jesus' release. But Pilate was trying to satisfy the crowds. It is usually an impossible position to be in, so he began to search for indirect ways to free Jesus. His first attempt was to send Jesus to Herod, which he was able to do because Jesus had come from Galilee, and area Rome allowed to be under the jurisdiction of the Galilean tetrarch, son of Caesar's friend Herod the Great. But instead of solving the problem, Herod sent Jesus back to Pilate, who then had Jesus beaten and scourged. Pilate's plan was to gain sympathy for Jesus in hopes that the wounds would pacify the crowd and make crucifixion unnecessary. None of Pilate's schemes worked. Then Pilate got a brilliant idea. He came up with a plan to release Jesus without making the mob mad at him. Pilate recalled a custom in Israel which as a symbol of the mercy of God and as a reminder of their own historical deliverance out of the bondage of Egypt, the people were permitted to ask at the Passover festival for the liberation of some offender who was at the moment in prison. Therefore, Pilate searched through his mind to recall a criminal that was notable as the worst offender in his prison. He thought of Barabbas. Luke describes him as someone "Who had been thrown in prison for an insurrection started in the city and for murder" (Luke 23: 19). As a rebel who was in prison for crimes he actually committed, Barabbas was everything Jesus wasn't. Matthew tells us Barabbas was "notorious" prisoner. Pilate thought, that given a choice between Jesus and Barabbas, they would surely choose to set Jesus free. Pilate went to the rostrum to offer the people this choice. "It is your custom for me to release to you one prisoner at the time of the Passover " (John 18:39). Then he asked them this question: "Whom do you want me to release to you? Barabbas, or Jesus who is called Christ?" (Matthew 27:17).

The saviour's fate was no longer in Pilate's hands. The majority of the multitude decided, and he was obliged to abide by their decision. The guilty prisoner Barabbas is an apt illustration of our own condition as fallen sinners. He represents the human race in its present condition, as fallen from God. Like Barabbas, we are everything that Jesus is not: sinful, selfish, and rebellious under the rule of God. Like Barabbas we are waiting on death row, for the penalty of sin is death, and after that eternal punishment. Yet, remarkably, almost unbelievably, considering how guilty he was, Barabbas was set free. An exchange took place, in which the innocent man was condemned to die, while the guilty man went free. Barabbas and Jesus change places. The murderers' bonds, curse, disgrace, and mortal agony was transferred to the righteous Jesus; while the Liberty, innocence, safety, and well-being of the immaculate Nazarene became the lot of the murderer. Barabbas is installed in all the rights and privileges of Jesus Christ. This is a picture of salvation. Like Barabbas, we were dead in our sins and doomed to die, but a great exchange has taken place in which Jesus takes our place so that we can take His. The true Son of God takes upon Himself the guilt of all our sin and therefore, is condemned to suffer the wrath of God. He does this by dying on the cross. But at the same time, His crucifixion is our justification; His condemnation is our pardon; and His bondage is our release. This is the Gospel; Jesus dying in our place, as our substitute, suffering the death that we deserved to die, and God raising Him from the dead to validate His work on the cross. This is Good News. Imagine what it must have been like for Barabbas when he heard the good news of the great exchange. He was not going to die after all, he was going home free, because Jesus would die instead. For Barabbas, that was pure Grace. His life was spared because Jesus died in his place. Not only was he crucified, buried, but He rose from the dead. This is the meaning of Easter. If you are a Christian, celebrate the exchange, but tell others so that they too can experience the great exchange.

If you do not know Jesus Christ as saviour, the great exchange awaits you, come to Jesus and experience His special grace. He will save you from the death your sins deserve and set you free forever.

Wishing you a Blessed Easter!