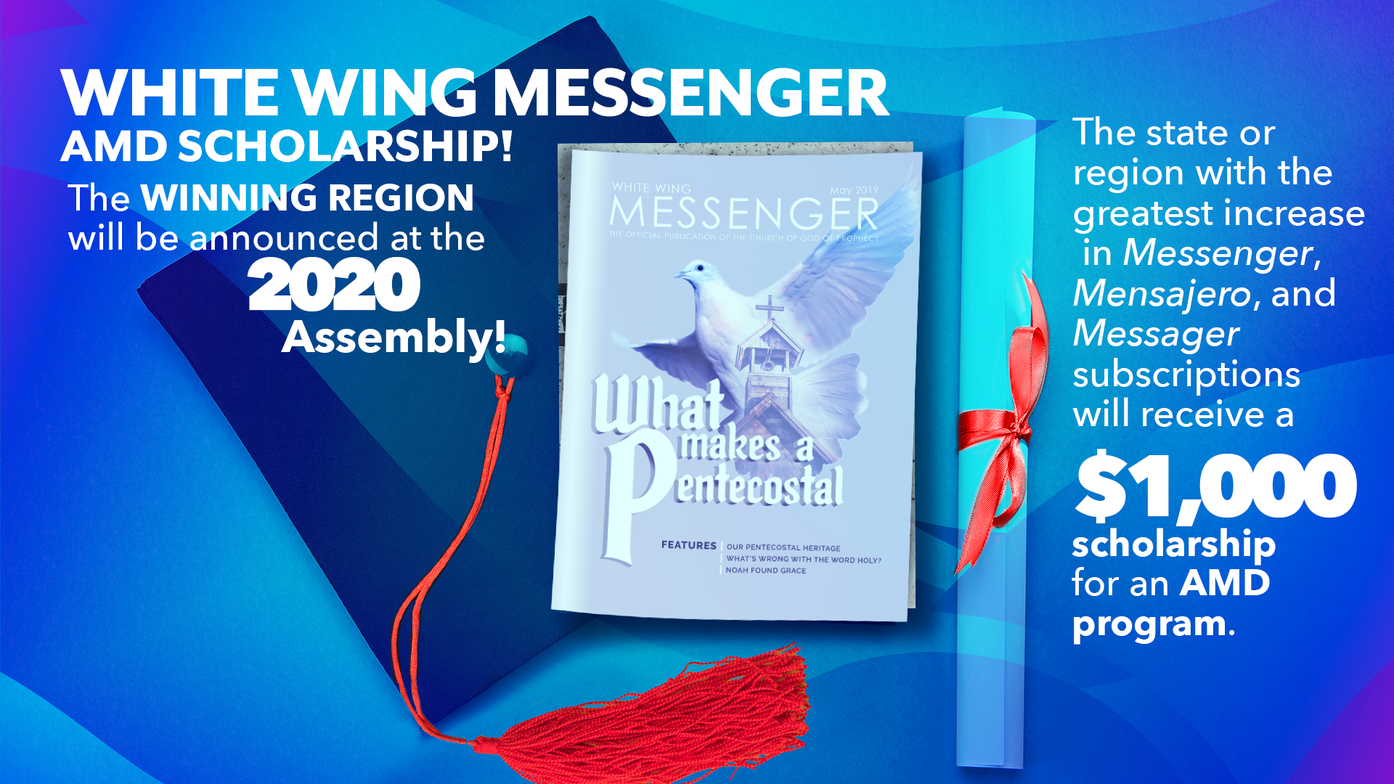 An article by Adrian Varlack Sr. From  the Steptember 2013 Messenger

While praying and meditating about the work, God whispered to me the words, “Samson’s Foxes,” and I was made to know that He wanted a school where children could be trained and educated for the cause of Christ . . . At that time we had not thought of a paper, but as the work developed and many friends had written to know how the work was progressing, the paper seemed a necessity and for weeks before the first issue appeared, the name “Samson’s Foxes,” was ringing in our ears almost day and night.1

So wrote Bishop A. J. Tomlinson as he entered the world of publishing to help support his missionary work in the foothills of the Appalachian mountains in Western North Carolina. Along with his family and the assistance of others at Culberson, North Carolina, he published Samson’s Foxes which, by January of 1902, had 620 subscribers.2

As most sources would testify, Tomlinson was a prolific writer who early recognized the value of publishing. After all, he had been a colporteur for the American Bible Society and the American Tract Society. He not only edited and published his own paper for about two years, but around 1904 he also published The Way with one of his assistants, M. S. Lemons.

From 1908 to 1910 he served as corresponding editor for G. B. Cashwell’s Bridegroom’s Messenger, indicating that he was not above sharing in the work of others. He was an avid reader of religious magazines and books, among which were, Evangelical Visitor, Tongues of Fire, The Mountain Missionary, The Way of Faith, God’s Revivalist, and The Bible Advocate. He was acquainted with the writings of George Fox, George Muller, David Brainerd, The Ante-Nicene Fathers, and Eusebius’ Ecclesiastical History.3

The first issue of the Evening Light and Church of God Evangel, the Church’s first official major publication, was published March 1, 1910, and later the Faithful Standard was added. Retaining this latter paper in 1923 when a serious division in the work occurred, Bishop Tomlinson made an attempt to keep it going but it did not last and was, ultimately, not necessary.4 At a special council meeting called by A. J. Tomlinson and held in Chattanooga, Tennessee, August 8–10, 1923, a number of decisions were taken, among which was a new publication, the White Wing Messenger. Lillie Duggar’s biography of Tomlinson reported the matter as follows:
One other important matter was discussed and decided upon by this council and that was that A. J. Tomlinson as editor, negotiate means to start a paper. The name decided upon was the White Wing Messenger. A brother saw a vision of the paper while the council was praying about the name. He said,” When I was praying this morning, I saw a vision which showed me the name of the paper in the most beautiful form that I have ever seen. The name appeared in arched form, the White Wing Messenger, with a beautiful dove bearing an olive branch in its claws just beneath
the arch. . .”

This called council closed on Friday, August 10, 1923, and the first White Wing Messenger was dated September 15, 1923.5 We note the symbolism of their dependence upon the Holy Spirit (the Dove) even in their search for an appropriate and reflective name for the publication. This God-dependency is still the Church’s way through prayer in matters both large and small. Twenty-one years later at the 39th Assembly, 1944, then-business manager of the publishing house, Avery D. Evans, testified:
Well do I remember the afternoon back in 1923 when our beloved A. J.Tomlinson packed his suitcase for a journey to Louisville, Kentucky, to attend the state convention. Just before leaving his home at 2525 Gaut Street, in the southeastern room on the second floor where I had a small office, he walked up to me while I was sitting at a little desk and, leaning over me, drew a long breath and let out a big smile and grunt and said, “Avery, I am about to go and I want you to see if Mr. Harle will let you have some money so you can get the White Wing Messenger printed.” In a few minutes he was gone and I proceeded to carry out his instructions, borrowing $50 at the Merchants Bank of this city with which we printed and mailed the first issue of the White Wing. For quite a while the White Wing was printed and mailed from the little offices in Brother Tomlinson’s home. [Also] for a time I carried each issue to the Post Office in a mailbag or two strapped to the handle bars of a bicycle that belonged to a boy whose name was Milton.6
International Connectivity
To a centrally built organization like the Church of God of Prophecy, international connectivity is crucial. The White Wing Messenger has been one of the greatest instruments of the Church’s connectivity. The late General Overseer, Billy Murray, wrote in a January, 1997 White Wing editorial:
For more than ninety years, the White Wing Messenger has been an inspirational publication, blessing readers around the world. Going into the homes of so many of our members, it has served as a means of connectivity among the churches.

As early as 1920, A. J. Tomlinson expressed the desire to publish the then Church of God Evangel in Spanish. In a section of his annual address titled “The Spanish-Speaking People,” he wrote:
Before I close I want to make mention of a subject that has been on my heart for two or three years. I refer to an opportunity to reach the Spanish-speaking people who are constantly flowing into the United States. For a long time I have started to prepare literature in the Spanish language and scatter it among them. Would to God someone who has the money would make it possible to add this to our printing plant. Some of our friends in the southwest has been urging us to print the Evangel in Spanish. This would be a great way to do foreign mission work at home.7

The drive to launch out internationally through publishing was indeed realized by the Church of God of Prophecy as its international White Wing Messenger (in some form) has been produced, translated, and printed from time to time in Spanish, French, Telegu (India), Indonesian, Zulu, Afrikaans, and Greek. Together with the widespread presence and distribution of the English White Wing Messenger, this informational organ has served as a vital point of communication, connectivity, and representative presence for the worldwide Church. Although not produced in as many languages, the Messenger still plays this critical connecting role.

Social Progress and Professionalism
From the days of Samson’s Foxes (1901–1902), children and young people were given a vital role in publishing. Halcy Tomlinson, one of Bishop A. J’s daughters, at age 11, was put in charge of the Children’s Department of the paper. Here is a sample letter and her editorial response:
Arvada, Wyoming, April 9, 1902
Dear Halcy:
I though[t] me to write to the dear little paper. We do not go to school now. My studies are reading, writing, spelling, and grammer (sic). I am nine years old. I am a little Christian girl and have three brothers. One is eleven, one ten years old, and the other three months old. Good night– Pearl Creswell.

Halcy’s answer:
We are very glad that you have joined our little band of writters (sic) and that you have put yourself in the care of Christ while so young. We hope to here (sic) from you again.9

Early in the Church’s history, its youth were charged with fund-raising for free literature work, both its production and distribution. Eventually, through what became the Free Literature Department at the publishing house, the “Victory Leaders” as they were called, raised hundreds of thousands of dollars and a main feature of this thrust was to provide free copies of the White Wing Messenger to older folks and to the Church’s more indigent international community. In fact, this youth-sponsored fund provided the bulk of the money for the printing of the White Wing Messenger in the various languages noted above.

In the Church’s growth and transitions over the years, the White Wing Messenger featured prominently as an avenue not only to report the group’s international progress, but to be a vocal witness and representation of the Church’s social development and maturity. In a church led primarily by bishops (overseers), it was expected that key positions on its international staff would be held by men who were themselves ordained bishops or at least seen as those who could deal authoritatively with other bishops and with doctrinal issues. Of course women had always provided the office support, secretarial help, and literary expertise for much of the Church’s operations. However, it was not until 1991 that Church leadership broke this mold with the appointment of Jerlena Riley as its chief financial officer for the Church’s worldwide operations. More to the focus of this article and during the international office restructuring of 1996, Virginia Chattham was appointed as managing editor of the White Wing Messenger, assuming the responsibilities assigned to the former all-male Assistant Editor’s position.10

This appointment and Virginia’s competent professional leadership, brought a new day to the Church’s official publication, both in its design and format and in the depth of the materials presented. It became a quality Christian magazine that was second to none. Around the same period, both the Spanish and French White Wing Messenger magazines took on a new look under the editorial leadership of Diana Garcia, another of our competent professionals. Not only did the White Wing Messenger gain prominence and respect among Christian literary organizations, but it became one of the most visible symbols of the Church’s scriptural and social progress. It brought a kind of respectability to the Church’s presence (and to its people) across the international spectrum.

Conclusion
When the history of a people is written, their art, literature, and poetry play a significant role for later interpreters. I have no doubt that the White Wing Messenger in its journey across these 90 years has served this Church well and will be found by historians to have done so. But beyond that, the Messenger is fulfilling its role of promoting the Gospel of Jesus Christ; of representing, explaining, and connecting the Church with its international mission; of giving a forum to God’s people to express and to share their gifts. Publishing and printing is an expensive and dynamic business and has had a somewhat turbulent history among us. I marvel, however, that by God’s grace and calling, this small Church has sustained this great effort these many years. This incredible magazine, its noteworthy achievements, and its faithful presentation of the Word of God, will continue to be a source of joy to the Church of God of Prophecy and a blessing to the nations.
“The Lord gave the word; great was the company of those who published it” (Psalm 68:11).