Church of God of Prophecy Making History in Orlando 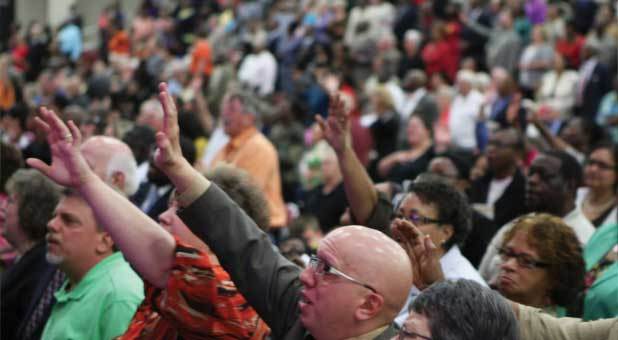 The Church of God of Prophecy, a Pentecostal denomination reporting a membership of more than a million constituents around the globe, will hold its biennial International Assembly in Orlando, Florida, July 30 to August 3. Foremost on the agenda for the 10,000 or more expected church leaders and members will be the selection of a new leader.

In addition to the leadership selection, the event will include nightly worship services as well as workshops and special activities targeted to children, teenagers, mission workers, pastors and members. Special guests for the event include Dr. Mark Williams, general overseer of the Church of God; Dr. David Ferguson, executive director of Intimate Life Ministries; Dr. Alvin Padilla, dean of Hispanic studies at Gordon-Conwell University; recording artists Seth and Nirva Ready; Tony Sutherland, worship leader at Free Chapel in Gainesville, Georgia; and leaders from the Multiplication Network.

In April of 2013, the position of general overseer, which is considered to be the "leader of leaders" among the international presbytery, was vacated and the oversight of the denomination is being held by seven general presbyters until the international meeting convenes and a new selection can be made. The seven presbyters include Bishops David Browder (Asia and Oceania), Sam Clements (North America), Clayton Endecott (the C.I.S., Europe and the Middle East), Benjamin Feliz (Central America, Mexico and Spanish-speaking Caribbean), Clayton Martin (Caribbean and Atlantic Ocean Isles), Stephen Masilela (Africa), and Gabriel Vidal (South America).

"We have been prayerfully going through a selection process," said Clements, who is the spokesman for the seven presbyters. "We are counting on God's guidance for these meetings."

Along with the leadership selection, the Assembly will be marked by:

This will be the first time the Assembly will be held in Florida, having convened in previous locations such as Kentucky, Texas, North Carolina and its original location of Cleveland, Tennessee. Based on hotel reservations and pre-registrations, leaders expect the attendance to be the highest in many years, possibly topping out over 10,000.

"The response to this International Assembly has been tremendous," said Paul Holt, chairman of the Assembly Task Force and executive director of Finance and Administration. "Delegates from around the world have been extremely enthusiastic about visiting the city of Orlando."

With a majority of the denomination's membership being from outside of the United States, the biennial meeting is marked by strong international representation. Of the 10,000 expected, leaders estimate that 1,800-2,000 will be of international origin, representing such countries as Ukraine, Australia, Finland, South Korea, Dominican Republic, Nigeria, Egypt and Pakistan.

"There are people who are able to come to this Assembly who have not had the opportunity to do so before," said Cathy Payne, coordinator of Global Missions Ministries at the church's international offices.

Through the week, events will highlight the church's diversity, including a Celebration of Nations on Saturday evening showcasing all 132 flags of countries the church does ministry in as well as a brand-new one for the small island nation of Tuvalu; a Mission Breakfast on Saturday morning allowing donors to interact with mission workers; and the Mission Encounter on Friday afternoon, which will include 76 booths with cultural artifacts, music and fashion from around the world.

Beyond the on-site activities, the Assembly general sessions will also be broadcast in high definition via an interactive webcast at the church's site. Based on statistics, for the first time the website audience is expected to exceed the in-person attendees.

Draw closer to God. Experience the presence of the Holy Spirit every month as you read Charisma magazine. Sign up now to get Charisma for as low as $1 per issue.

Has God called you to be a leader? Ministry Today magazine is the source that Christian leaders who want to serve with passion and purpose turn to. Subscribe now and receive a free leadership book.

AM I FULLY COMMITTED... Am I fully committed?...